OK, I’m a secret goth and I still totally love the film The Crow.  It’s camp and silly and it seems incredible to me now that we took it so seriously once – it was the early 90s, I was just clicking into my teens and it seemed so cool and romantic and deep.  A boy in the year above us – who was long-haired and soulful-eyed and in a cool band with my friend Jason –actually got a tattoo of The Crow.  Yes, Brandon Lee’s face across his back, possibly with some meaningful quote like ‘Love is stronger than death’ or ‘It can’t rain all the time’ (the two classics).  I wonder how he feels about that now.  Maybe he still really, really loves Brandon Lee and thinks it was the best idea he ever had.

Anyway.  If The Crow was actually not that cool in a wider, grown-up, actually cool sense – then its very low-rent straight-to-video sequel – The Crow: City of Angels – was truly the dregs.  I loved it and watched it on video repeatedly.

The story is not particularly worth mentioning – OK, the little girl from the original film, Sarah, is now grown-up and someone else comes back from the dead to avenge a loved one (he’s called Ashe, which is actually a way better avenging-angel-of-death name than the original ‘Eric’) – but the best thing about it was the soundtrack.  I bought the album and was obsessed.  The lead track was Hole’s glitter-doom cover of Fleetwood Mac’s Gold Dust Woman (still one of my favourite songs of all time, brilliantly gothed up to the nines) and it also included PJ Harvey and Iggy – and (less cool now but favourites at the time) Bush, Pet, Korn and the Deftones.

The second best thing about it was Sarah’s tattoo.  Yes, something about The Crow and tattoos really goes together.  There is a scene in which Sarah is shown in the shower in her cool semi-derelict apartment, and the camera pans in on her tattooed back – showing two full-sized feathered angel wings drawn in intricate red ink.  For years – literally, years – I wanted to get an exact replica.  I very nearly did once, one reckless day in Camden when I was 17.  Fate intervened and I ended up forced to abandon the idea.  Thank goodness for that – while I still love tattoos, that would have been beyond tacky. 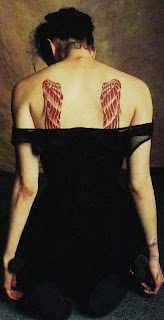 Still, I look back on that film, the soundtrack and particularly that image with great fondness.  I’m not sure if I’d go so far as to say it’s worth a watch now, but I do recommend staying friends with your inner teenage goth somehow.  You figure it out.  Just maybe not in permanent ink.
Publié par ECW à 09:58