* To fill you in – if you have not read my book, which you can buy here – Trouble Every Day are a fictional band.

I confess: ‘Trouble Every Day’ is not an original phrase.  I did not invent it.  I liked the sound of it, and I nicked it.

It is the title of a 2003 film by the French filmmaker Claire Denis, starring Vincent Gallo and Beatrice Dalle.  Anyone who knows me will know that these facts (chiefly: French, Gallo, Dalle) render this a film ripe for me to fall in love with.  It’s actually an existential horror film film about cannibalism; it is dark and disgusting and one of the most shocking things I have ever seen.  In fact, I should probably not be drawing more people’s attention to it, in many ways.  However, it is also beautiful.  It is full of metaphors about love and life and the world, and it is as visually powerful as a punch directly to the eye.  When Shane and June stand at the top of the Sacre Coeur and her scarf blows away in the wind – I could practically cry just thinking about it. 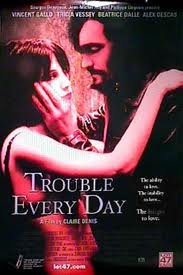 It stuck in my head long enough and strongly enough for the title to pop into my head when I was trying to name a fictional band.  It is, unusually, the only name I thought of – I didn’t change it once throughout the writing process, even as my leading man and many supporting characters went through one of more name changes.  Vincent August and co were always Trouble Every Day – incidentally, Vincent’s name came from a hybrid of Mr Gallo (the film’s aforementioned star and an object of my long-term obsession) and August because the beautiful lead female character in the film is called June, but that didn’t sound cool enough; July was too Miranda, and so August was next.  This process – naming band and singer – may sound complicated here, but actually took about three seconds in total, and it all stuck.

When I think of the band themselves, a few real-life bands spring to mind: a tiny bit 30 Seconds to Mars, a dash of the Horrors, a sound that is probably inspired by Dylan as much as Joy Division.  However, the main inspiration for the band – how I imagine their look and their sound – comes from my teenage, and ongoing, love for Placebo.

Let’s get one thing straight: Placebo have never really been ‘cool’.  However, I loved them from the moment they arrived and I love them to this day.  Brian Molko was my number one pin-up in my early teen years of the mid-90s, and he’s still right up there. 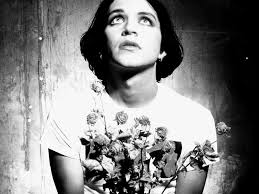 The other pop star I was in love with – since childhood, and again until my dying day – was obviously Kurt Cobain.  However, there is not a lot of Kurt in Vincent August – I wanted Trouble Every Day to be quintessentially English, suburban and teenage.  Kurt was too cool, too American icon, too naturally beautiful.  Vincent – in my mind – is taller than Brian, and has a bit less make-up, kink and spite to him; Vincent loves classic rock as much as he does goth, and emulates Springsteen as much as he does Bowie.  In fact, there is a lot of Brian in there but – if I close my eyes – he also kind of resembles a very young Gavin Rossdale in eyeliner.  There.  I said it.  I knew, even at the time, that Bush were a suburban English Nirvana rip-off, but I kind of loved them – I was obsessed with their song Mouth and I went to see them at the Shepherd’s Bush Empire when I was 14, one of my first gigs, the year before I saw Placebo there. 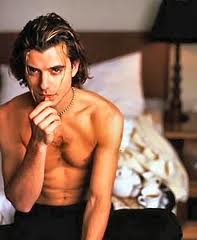 My interest in Gavin was fleeting (although he is now to be admired as a handsome older gentleman with a fabulous wife), but Brian Molko has that most special place in my heart – an early pin-up who has aged just how I wanted him to.  To be perfectly frank, I probably fancy him more now than I did at 16, when I literally had a shrine to him in one corner of my bedroom.  When Sorana is 30, maybe she’ll feel the same way about Vincent August.  If she’s lucky.
Publié par ECW à 16:12