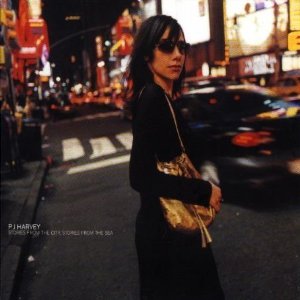 It is well documented that I love PJ Harvey and everything she has ever done.  The proudest moment of my life so far was possibly the time I was wearing a PJ T-shirt and a random man in a pub called me an ‘arrogant bitch’ for ‘wearing a T-shirt of my own face’.  Nice.
However, this particular record holds a special place in my heart.  It came out in 2001, when I had just turned 20 and was spending the summer in Hong Kong, staying with my cousin and working at MTV.  Every day, I would take the bus and the train to my office in Tsim Sha Tsui, feeling like hot shit and listening to ‘You Said Something’ and ‘Good Fortune’ on repeat on my Walkman.  I don’t think I (deliberately, anyway) listened to any other music the whole time I was there.
I ate noodles and didn’t drink and wore knock-off Hysteric Glamour and Superlovers T-shirts from amazing market stalls.  I rode the tram all day for 20p and wrote reams and reams of rubbish in my little travel journal.  This record soundtracked every day of it.
I was out there for September 11th 2001, a few days before I was due to go home, with the same sense of surreal horror that everyone in the world had, as I watched the breaking news on the cinema-sized screens at the MTV Asia offices.  For the whole flight back, I cried and listened to ‘This Mess We’re In’.
Two years later, I met a man who also held this record dear; we sat on a fire escape and sang PJ/Thom Yorke harmonies.  But that’s another story.  I expect I’ll tell it to you one day.
Publié par ECW à 12:45