I have always had a fringe.  There has never, ever been a time when I have been fringeless.  With the exception of that ill-advised six months when I was 12 and wanted to look exactly like Kurt Cobain so much that I copied his exact haircut – I didn’t realise that other girls were content just to have pictures of men on their walls, rather than turn themselves into them.
Anyway, I had an extended flirtation with those weird extra-short fringes that were so popular in the 90s (and which my friend Rachael and I still call ‘the Vickie fringe’, in honour of the most amazing character from the amazing film ‘Reality Bites’), or occasionally a longer side-swept arrangement – but I have always had a fringe, usually just a straight one that ends around eyebrow level.  Easy.
In fact, aside from a few variations in colour (and chopping experiments in Camden Market, and the Karen O bowl), I have always had the same haircut.  Any school photo of me from the age of four onwards will tell you – I have always looked exactly the same.
This is for many reasons.  One is that my forehead is quite large and, in certain lights, seems to look weirdly…lumpy.  However, necessity aside, I just really, really like fringes, so would have one anyway.  I aspire to have the greatest fringe possible, and as such have a slightly obsessive relationship with my habit of Google image-searching terms such as “Cat Power fringe”, “Claudia Winkleman fringe”, “Jane Birkin fringe”.  I have even persuaded unwilling friends to get fringes of their own, despite aversions to fringes.
You get the picture, as Lush once said.
Then, I recently read an interview with Joanna Newsom.  If you don’t know (although you probably do), Joanna Newsom is a ridiculously talented singer and harpist.  If you have not heard her epic album ‘Ys’, please do so.  She is also extremely pretty.
Joanna Newsom is roughly the same age as me, and was talking about the fact that she had always had a fringe, never in her whole life been without one, etc.  So she dared herself to grow her fringe out.  The concept that she had essentially been hiding behind her hair, that her entire face had never been exposed to the world, had been troubling her.  The idea of going fringeless terrified her, but she did it.
Of course, she looks astonishingly pretty.  More importantly, she said, she now feels liberated.
Now, this concept is in turn troubling me.  Should I be that brave?
BEFORE: 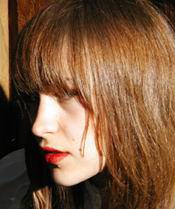 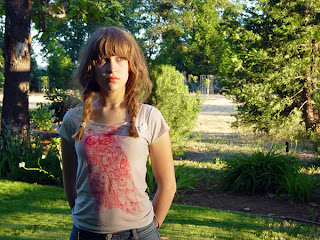 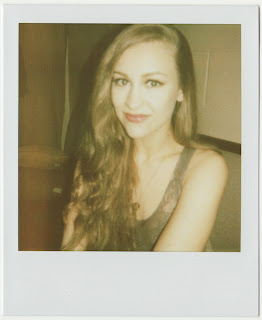