No, not Jeff Conaway ‘s character in Grease (although he was also awesome), but the short-lived mid-to-late 90s Sunderland girl(ish) band.

Kenickie were one of the seminal bands of my youth – and by seminal I mean ‘to me’ rather than in the wider sense.  They weren’t great, to say the least in retrospect, but they perfectly encapsulate a few years of my youth.  Their influence on me at the time was far greater than their two (very patchy, but great fun) albums would suggest.
The first was ‘At The Club’.  It’s hard now to believe that it went Top 10.  The sleeve was full of hilarious ‘four indie kids go mad in London’ pictures, which I basically modeled my teenage look upon.  This means: spangly little dresses, plastic trousers, multiple hairclips, chunky high heels, poorly dyed hair, furry-collared coats, too much eyeliner and Rimmel Black Cherries lipstick (I wonder if they still make it?).  With tracks such as ‘Come Out 2Nite’ (“wear high heels and get a record deal!”) and ‘PVC’ (“it’s my favourite plastic!/coz it’s nice and shiny and completely waterproof!”), it reminds me of that sixth form feeling of almost-freedom and being in a gang for the first time ever.
You know, you’re hanging out in the park and maybe sneaking into the pub and getting ready at each other’s houses and you’re just so awesome and you know you look great and you love everyone so much and it’s summer it’s Friday and that’s the best day of the week and it’s started to rain but you’ve got a house party to go to and you really want that new coat from Miss Selfridge and, hey, why don’t you all just swap coats because that would be hilarious, and as Kenickie themselves put it “we’ve got our gang and I know we’ll always be friends”.
Then when you get home you can listen to ‘Robot Song’ (“I wish I had the skill to stop my thinking”) and ‘Acetone’ (“faster, faster on your feet, you have to watch the sick stains on the street”) and feel all melancholy about the fact that Vicky Lloyd bought that Miss Selfridge coat first even though you said you wanted it first, and that Nico didn’t even look at you once and you don’t like his band that much anyway and your life is not worth living and, oh no, I appear to be crying.  Before cheering up again.
Their second long-player ‘Get In’ turned in on itself at a time when I did, too.  It’s much more muted, bittersweet electronic tones (compared to the loud guitars, handclaps and answer-back chants of the first) remind me of sitting in my bedsit above a multi-storey car-park, chain-smoking and reading Jean Genet and feeling deliciously melancholy at all times (“we didn’t drink, we didn’t laugh, we didn’t like the weeknights”).  It’s the perfect musical embodiment of the morning after – “sun is up and the dawn it is pale blue/ we’re on Nintendo sitting in your front room”.
Ah, Kenickie.  We’ve all moved on, but you’ll always hold a special place in my heart.
I’ll leave you with an opinion on Kenickie from that sage on all matters, Courtney Love:
“They're a big bunch of sex, that band Kenickie. They're a big, raw-boned bunch of fucking sex — all three of them and the boy. I hope they get good. I hope we're a good example to them, I hope this record's huge and then the big labels will start sniffing around and then those big fucking raw-boned sexy Newcastle girls will be huge and have Number Ones and there will be an Amazon planet the way I want it.”
And a reminder of their amazing, of-the-moment look: 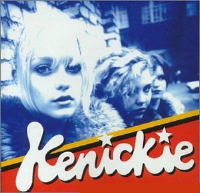 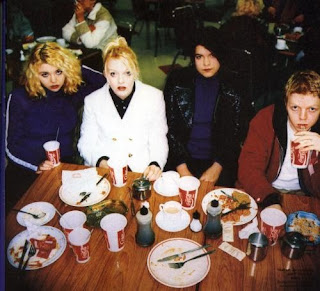