Today, I am very pleased to present a guest blog from Amy Bird!  I know, right?  It's *almost* like this a proper blog or something.  Anyway, Amy and I share a publisher, and her debut - Yours is Mine, a thriller that mixes some very modern elements with time-honoured existential questions - has recently been released.  It's one of those books that is best read with as little prior knowledge as possible, so I'm gonna STFU and hand over to Amy... 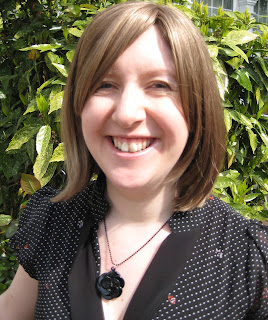 In her chilling YA debut, my lovely host Eleanor reminds us just why identical twins are so spooky – Sweet Valley meets The Shining in a noir twist. In my debut, Yours is Mine, I’m exploring double trouble from a different perspective: what if you agreed to exchange identities with someone, masquerading as each other? Rather than Single White Female, think Double White Female with Mutual Consent (you’ll agree Yours is Mine is a catchier title…).

Clearly, twins have a tactical advantage in the whole masquerading as each other stakes. Even though Eleanor’s identical twins have their physical differences – the odd scarred face for one thing – they could probably pass for each other, if they wanted to. But what about exchanging identities with a stranger – how would that work?

In Yours is Mine, Kate Dixon agrees to handover details of her life to Anna Roberts, who purports to be a PhD student doing a psychology experiment. Anna assures Kate that as they are both slim brunettes of the same age, Kate will be able to pass herself off as Anna to casual official acquaintances, such as gym staff and doctors. The rest of the relationships, Kate (as Anna) will be making with people Anna has never met before, or will take place on-line.

Kate’s idea was to take part in the exchange temporarily to get her old spark back. But with Anna, she has to fight to get anything of her old self back at all. Anna is far from being an identical twin – she has her own ideas of what Kate’s life should be like – and Kate remembers what being an individual is really about. But the question is: will she be able to live her own life again? Or will trouble from doubling haunt her forever?

Yours is Mine is available now from Carina UK, the new digital imprint of Harlequin, at http://www.carinauk.com/yours-is-mine and via Amazon http://www.amazon.co.uk/Yours-is-Mine-ebook/dp/B00DP220YY,  Kobo http://www.kobobooks.com/ebook/Yours-is-Mine/book-u1u9U5e7aUm9JztScFyNOA/page1.html and iBooks. You can follow Amy’s progress at www.amybirdwrites.com, on twitter at https://twitter.com/London_Writer and on facebook at www.facebook.com/amybirdwrites. 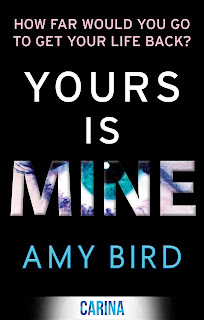