Yesterday was a genuinely exciting day, which rarely happens to me.  A TOP SECRET project that I have been working on was announced to the world, so finally I am allowed to talk about it!

The news is that I am working on a very exciting and totally unique collaborative novel with six other brilliant YA writers. I am so hugely honoured and excited to be working with such a wonderful and inspiring group.  I feel incredibly lucky to be involved.

So, the writers are: Sara Barnard, Holly Bourne, Tanya Byrne, Non Pratt, Melinda Salisbury, Lisa Williamson and me.  The novel is called FLOORED and it will be published next summer (2018). The novel was the brainchild of my brilliant editor Rachel - it is the story of six characters, who meet by chance and whose lives become intertwined.  We're calling it The Breakfast Club meets One Day. 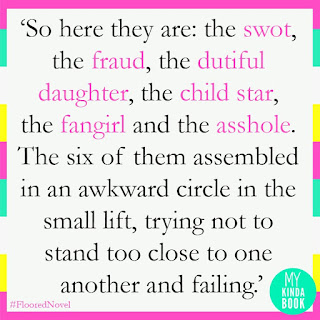 One of my favourite things about this collaboration is that we are not going to tell who wrote which character.  I am fascinated to see if people will be able to guess.

You can find out more information about the project in yesterday's announcement in the Bookseller.  We celebrated the fact that it is no longer a secret by meeting up yesterday for lots of tea and chatting and a lovely lunch.  And taking selfies in a lift.  This gang are the best fun, basically.  I am so incredibly delighted to be a part of it. 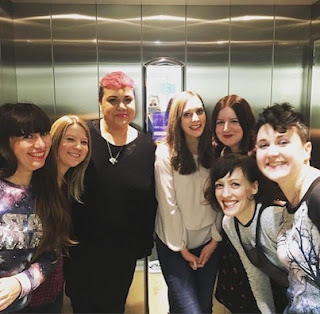 Possibly the quietest weekend on record.  Followed by a gentle and sleepy Monday morning.

On this Monday morning... If Kurt Cobain was still alive, today would have been his 50th birthday.

I can't quite process this thought.  I would love to have seen KC at this age.  He would have been GREAT at being an older man.  Like so many people who die too soon, he had an old face even as a beautiful young man.  An air of having been around a long time, as well as having packed a crazily impressive amount into 27 years.  At 27, I think I was still working out what haircut suited me; he was a father and a husband and had made In Utero.  He looked ageless.  Jesus and William Burroughs, I think.

I like to believe, had he lived, he would be following a broadly Neil Young sort of role in the world.  I wish he'd just been allowed to give it all up and disappear for a bit, and then I really believe he might have eventually, quietly resurfaced with the most interesting music of his career.  I think he might have lived in the woods somewhere and occasionally put out an unlistenable album, occasionally something brilliant.  Even more grizzled, more difficult, more sexy; maybe when it had all calmed down, more funny.  I'd like to have seen that.

I think Kurt would really like Cat Power and Pussy Riot and RuPaul's Drag Race.  His hair would be longer and even more raggedy.  He would still smoke and he'd probably watch a lot of Netflix, generally.  He would paint more.  He would be political.  He would have worked with Michael Stipe. Maybe he'd have written a novel, which I assume would have been dense and unreadable and I would have loved.

Kurt, I'm still sad you died. It's a sadness that still has the exact same flavour as it did when I was 12.  It's one of the many things I wish were different about this world.  I'd rather you were in it.  I hope you got your Leonard Cohen afterworld.  Of course I do.

I should probably put a Nirvana song here.  But we know them all so well and you can sing your favourite ones in your head.  Mine are probably Heart-Shaped Box, Drain You and About A Girl.  Maybe in that order.

So here is a song that is more like I am feeling today.  I've been listening to it on a loop all weekend; I don't know why.  I have no idea how KC felt about Elliott Smith.  Wistful and fragile, but with a sting in the tale...  It feels fitting.

That's kind of it.  I'm probably forgetting some important things, but that's the way it goes.

Spring is in the air so much you can taste it in your mouth.  A week ago we were catching snowflakes in our hair, today I can see actual sunshine as I write this.  The south bank right now is a dream.  We're nearly there, comrades.

Heaven can wait and hell is too far to go...