Yesterday, 5:30pm, in a cab:
Preston Park to *pub* in Kemptown, please.
Going all the way across town in a cab, just for a drink! Doing anything special?
Actually, I'm meeting my ex-boyfriend, to give him back some of his records. That's what this box of stuff is.
Oh. Sorry.
It's OK. It's not recent. I've just had this box of records for a long time.
How long?
Nearly two years. It's still going to be weird, though.
Well, throw them at him!
Nah, it's not really like that. It's OK. Thanks, though.
Your fault then, was it? That's the thing with women: when they change their mind, they change their mind for good.
I'm not sure that's particularly women. Maybe just humans?
Maybe. My ex-girlfriend, though...
Oh dear, are you OK?
Yeah, I don't care. I'm over it. Tried to get her back, she wasn't having it. Have a good evening, sweetheart.

Approximately two hours later:
Ooh, look at you two and your coordinating outfits. Adorable.
Haha, thanks.
Are you two a couple? You must be, you look great together.
Actually, we're not.
We used to be. We're not any more.
Oh... That's awkward. Well, you obviously still have a beautiful connection. The outfits and everything. It's nice you can still go out for a drink together. You look like a couple.
She was just giving me my records back.
Yeah, we hate each other.
I can't tell if you're joking. Have a nice night, you two!
Publié par ECW à 12:22 Aucun commentaire:

Courtney's right.  This IS a really sick song.  We all know that.  It's actually always really annoyed me how people in the crowd cheer when she says it.  It's not cool.  Sick is not cool.  However, I *do* like - a lot - how dirgy Eric makes the guitar on this.  It's much more fitting than a girl-group sheen, although that obviously has its place.

I've been listening to this and other obscure Hole gems this week (I'm genuinely not trying to be obscure when I say 'My Body The Hand Grenade' is my favourite Hole album).  Thinking about it, Hole are really good on cover versions.  My faves are (look 'em up; they're worth getting hold of):

This post is also brought to you by: migraine medication, watching 'Nocturnal Animals' while bombed on migraine medication (emphatically NOT recommended under any circumstances), not getting enough writing done and eating a lot of leftover macaroni cheese.

I am extremely excited to announce that - following our wildly brilliant mini-workshop at YALC - Harriet Reuter Hapgood and I are hosting our very own BRIGHTON FANZINE TEA PARTY.

If you'd like to come, you can buy a ticket here!


I AM NOT ASHAMED zine (by YA authors Harriet Reuter Hapgood and Eleanor Wood) presents THE BRIGHTON FANZINE TEA PARTY. Come and spend a cosy afternoon with us, making zines and celebrating DIY culture – with cake and music and glitter. Teens welcome!
What you get: 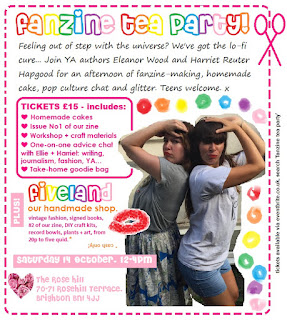 Exciting news, I have made myself a Proper Official Author website!

You can look at it here.  It's very fledgling, so feel free to let me know if you have any comments or suggestions (you can use the handy contact page!), but please be kind.  Technology is not my strongest suit, and neither is self-promotion.  However, I have lots of events and things coming up (more to be announced!) and thought an actual website would be useful for such matters.

I will definitely still be spouting my random thoughts and feelings on things that don't really matter here, in my usual ramshackle and sporadic fashion.  Nil desperandum, obvs.  But please do have a look at my website proper for news, events and official things.

He was a man made of dreams.  ‘He was just everything one could want,’ said Patti Smith of their first meeting.  A cowboy, a writer, a rock n roll energy, a classic face.  A crescent moon tattoo in the crook of a hand, of course.

He’s the sort of hero one would conjure up.  A cowboy and an American literary genius.  Is there any word sexier than the word ‘playwright’ (and even then they so seldom look like Sam Shepard)?  A man of letters and the outdoors.  He was Cowboy Mouth perfect.

Last night, I spent a lot of time flicking through his Seven Plays.  Just reading odd pages and lines, the rhythm of it all.  The set-up to La Turista, talk of whisky under the sofa…

“This isn't champagne anymore. We went through the champagne a long time ago. This is serious stuff. The days of champagne are long gone.”

Later in the evening, and all I wanted in the world was to watch Paris, Texas.  (Shepard wrote the screenplay.)  It’s a film I haven’t watched in a long time, but which haunts my memory like I suspect it does all those who have ever seen it.  The loneliest film I have ever seen.  Nastassja Kinski in her pink sweater.  I watched it as a teenager, around the same time I first saw Betty Blue, and I still conflate the two in my mind.  Photogenic desert ennui, doomed love.  Something to aspire to – they probably had too much of an effect on me at too young an age.

The day before, the worst sort of Sunday, I had woken up in a half-dream panic: I could not remember the number of the house where my ex-boyfriend and I fell in love.  It was over a decade now, and yet this struck me as all wrong.  It was a significant house, even though it didn’t look like one.  I looked the road up on a map and I discovered the very same house was currently for sale.  The breath was knocked out of me as I scrolled through photographs.  An ugly sofa where there used to be a drum kit.  A baby's room where we used to sit on the floor and watch subtitled films with the curtains drawn, for days on end.  I knew those rooms; I walked those floors.  I used to live alone before I knew you.

The same desert feeling of sadness.

I was convinced I owned a copy of Paris, Texas.  Maybe once I did.  Turns out now I don’t.  I couldn’t find it anywhere.  I thought it had to be on Netflix; it wasn’t.  The closest matches that came up were Paris is Burning (a favourite that I have watched and watched into the ground) and Last Tango in Paris.

I had never seen Last Tango in Paris all the way through.  I vividly remember seeing part of it.  Drunk-ish, late at night, in bed with a boy called Rich, who was not my boyfriend.  He was an old friend, though; he was a sweet soul.  I was 21, before all of it.  Marlon Brando on a tiny TV propped in the corner of the room before we passed out.

Last night, I watched the whole film.  I hated it.  It was the worst thing to watch.  I thought I’d like that early 70s mood, the Paris apartment, the coats.  I love a good coat.  I hated Last Tango in Paris.  Did I mention I hated it?

It’s like when I read The Story of O and expected it to be much like Anais Nin, who is my favourite.  Safe to say, it was not, and I still pretty much take that book as a personal insult.