So, I mentioned a little while ago that I was going to Korea, and then said no more about it. It was a whirlwind trip and a very odd time.

Five days in Seoul, a thirteen-hour flight and a nine-hour time difference - it was intense. I arrived early on a Saturday morning, bone-tired, having missed a night's sleep. I checked into my hotel early and sneaked an extra hotel breakfast in when I arrived.

Pretty much nothing was what I expected. Seoul is a grey, concrete city - at times you could be somewhere in America, if not for the signs being in Korean. It's mountainous and every street seems to be on a steep slope.

We went straight out exploring, making the most of the free time while we had it (it was a work trip with a packed schedule). We got straight onto the metro, and I was most struck by the fact that everything in Korea is cute - when you buy your metro card, you choose which cartoon character you would like on it. I went for a slightly angry-looking rabbit.

We walked around busy streets and market stalls, spotting cat cafes and a meerkat cafe and - weirdest of all - even a 'poop cafe'. We ate an incredible lunch, and I had my first proper Korean kimchi and bibimbap. I tried to drink a lot of Korean coffee, but still had to go back to the hotel that afternoon for a little sleep. Thus fortified, we had the first of quite a few nights of soju, Cass beer and Korean whisky, to the accompaniment of the Hilton hotel bar resident band (their Ace of Bass covers were my personal favourite, although I think the residents may long remember my dance routine to Footloose...).

On Sunday morning, I hiked up a mountain! It was incredible! This was my favourite thing I did in Korea. The views were really quite awe-inspiring. Seoul is a much vaster sprawling city than I could have imagined. You can see all the mountains up on the other side, as well. However, my favourite thing I saw was a special 'proposal area', clearly for the romantically inclined but unimaginative. There was even a designated spot to stand in for the perfect engagement selfie. I mean, it was obviously terrible but I loved it. Sadly didn't see any live-action proposals, although I am assured they are very common.

Of course, being in Korea, I managed to go shopping and fill my suitcase with bizarre beauty products. It was an incredible education: snail slime, placenta, collagen, acid peel, gold, swallows nest - these are apparently why everyone there has such beautiful skin. And they really do. It's fascinating.

Then on Sunday night, I received a message from my mum that made the rest of my trip very surreal and sad. She told me she was rushing to New York as one of her close friends had been involved in a terrible, tragic accident there. Unbelievably sadly, with the emphasis on utterly unbelievable, he - a beautiful 34-year-old man, who was so bright and kind and special I cannot even tell you, who my mum shared the most incredible friendship with - did not survive.

The rest of the trip was a blur. I swam in the hotel pool at five in the morning. I lay down and slept in the sauna. I drank a LOT of Japanese whisky in that hotel bar.

I pretty much had, as a boy would sagely note later, 'the full Lost in Translation experience'.

It's true. Thankfully, amid the strangeness, there is something comforting about a foreign luxury hotel. In some ways I was glad not to be at home, even if at times I wasn't exactly sure where I was.

I took two Valium on the flight home and still couldn't sleep. For the first time in my life, I did not even watch a film - I watched episode after episode of Nigella cookery shows, willing myself into her cosy kitchen.

I got home wondering if any of it had even happened.
Publié par ECW à 12:30 Aucun commentaire:

The end of Love.

At the weekend, I binged the whole of series three of LOVE.

I first watched series one because my stepbrother Simon recommended it. He thought I would love the writing, but mostly I think he just had a major crush on Mickey because he loves a girl in sliders, and he just wanted someone to talk to about it. Simon is unfailingly good at TV recommendations, though.

LOVE is one of those programmes I have come to feel incredibly fondly about. If anything, the writing is a bit TOO good. I relate to those characters a bit TOO much.

Funnily enough, my dad and stepmum have just started watching it from the beginning. Discussing it on the phone with them both yesterday, I sensed that they were basically treating this programme as an exercise in 'Learning More About Ellie's Life'. My dad drew some obvious parallels. My stepmum said she was gleaning a lot about texting in the context of modern relationships, and how tricky it actually is.

For me, series three has come at the ideal time and has some pertinent themes. I want to live authentically. I want to stop feeling the need to put a narrative on absolutely everything and turn it into a funny story. I need to be reminded not to put everything into neat narrative boxes: he's the nice guy, I'm the fuck-up. It's something I'm guilty of. That's not how it works. It's lazy and reductive. It's ultimately extremely unhelpful.

I shouldn't need a TV show to tell me that, but it's not a bad thing to see these themes in action sometimes. And it's definitely why I wept through the last couple of episodes of LOVE.

I'm so happy it ended where it did.

You know when you're in that golden early phase with a new person you like, and you stay up late chatting, and there's so much to say that you keep talking over each other and giggling, and pulling out stories you'd forgotten all about like they're the most important thing in the world?

Well, for no apparent reason, I was recently telling a boy about the old days at Popstarz ('with a z', as I always have to helpfully add, as if the gay indie disco club night was, in fact, Liza Minelli). All about me and Russell and Leon and the outfits and the perfect playlist and how it was pretty much an indie kid's early 00s version of Studio 54. Just, you know, a lot grubbier and cheaper and with more Skunk Anansie. We knew everyone and they knew us, and we would spend all week planning our outfits.

We followed Popstarz as it moved around London: always on a Friday night, always playing the dance remix of 'Sylvie' by St Etienne at some point in the evening. The first time I went, it was at the Leisure Lounge in Holborn, underneath Boots. I remember I wore a red dress and platform shoes and I danced on a podium to Bis. It felt like I had found my place.

By the time it moved to the Scala in Kings Cross, I was probably 21. Russell and I used to go every week. I still have a photograph of us there on New Year's Eve, the night he accidentally punched me in the face while executing an ambitious dance move, and I spent the countdown to midnight trying to keep dancing and pretend my nose wasn't bleeding all over my favourite pale blue jeans. My outfit had been somewhat inspired by Madonna's video for 'Don't Tell Me'. It was probably for the best that I had to throw those jeans away.

I had some of the best times of my life dancing and drinking vodka with Russell at Popstarz, often to the Pixies. We were young and everything was ironic and everyone in that place was beautiful, in their vintage dresses and New York Dolls T-shirts and asymmetrical haircuts. We had crushes on everyone and we used to get there early, so that we could make the DJ play PJ Harvey for us.

That time only drew to a close when Russell decided to go back to art school and moved to Epsom, and I met my first serious boyfriend. We thought nothing would ever change, but of course it did, and our Popstarz life just gradually tailed off.

After I moved to Brighton, I only saw Russell once. We went to a bar in Soho and I can't remember what we talked about. I certainly didn't think it would be the last time I'd see him. He was the first boy I ever kissed (to 'Think Twice' by Celine Dion). Then we broke up as only dramatic teenagers can, and didn't speak to each other for a few years. When we bumped into each other again, he was wearing a Bjork T-shirt and I was wearing a black poloneck with a short bob, red eye make-up and an air of ennui. We became not so much best friends as twins. It was destructive and beautiful. It had to end sometime.

I don't know where he is now, what he does, even what he's like as a real grown-up. He followed me on Instagram this week, out of the blue, using the same nickname he had when I was seventeen and he was nineteen.

The last year that we knew each other, we used to drive around aimlessly for hours in his car, just talking. We made up a whole secret universe. He was obsessed with a song by a new band called the Killers (ha!). He played it into the ground, on repeat, while I begged him to make it stop. I always hated that song. I don't any more. When you grow up and songs take you back in time - to a boy's car, to a nightclub, even to a party that wasn't that much fun at the time - you never do.

It's been quite a week already.

Yesterday, Harriet Reuter Hapgood and I took our magical travelling fanzine roadshow to St Marylebone School in London, where we taught a whole day's worth of zine workshops as part of their International Women's Day week. The students were inspiring, clever, creative and an utter delight. They put together an incredible zine packed full of their feminist heroes: from Beyonce to Virginia Woolf to Ada Lovelace to Billie Holliday to Emma Watson and back again. Absolute joy.

Then, today saw the official cover reveal for FLOORED, the collaborative novel I have been working on with the YA crack team of Sara Barnard, Holly Bourne, Tanya Byrne, Non Pratt, Melinda Salisbury and Lisa Williamson. It's been a long time in the making, an incredible experience, and it comes out on 12th July. 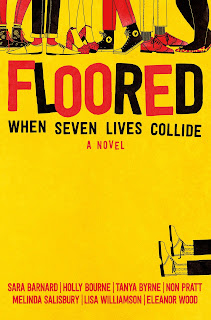 What do you think? Isn't it cool?!

Hopefully it gives you a little insight into what it's all about... well, seven lives colliding.

And most importantly... can you guess which shoes are mine?

As if that's not enough excitement to be going with - in a couple of days, I'm off to South Korea. This life is bonkers sometimes. I'm into it.
Publié par ECW à 21:59 Aucun commentaire: