Recently, my boyfriend and  were out for a walk and saw that a house has gone up for sale in our 'dream road', close to where we currently live (but obviously way nicer) in Brighton.

Because living in a house like that would mean that the stars had all lined up and I could live my dream life.  This is what it looks like.

I would wake up early, take my small dog for a walk and then have a delicious and healthy breakfast.  Get dressed in smart work clothes and head upstairs to my office; my office is high up, on the top floor and with a lovely view of the Brighton roftops and sky.  It is also beautifully decorated, Farrow and Ball-ed to the nines, with a variety of inspirational pictures in antique frames on the walls (you know, maybe one of Virginia Woolf to celebrate the fact that I finally have 'a room of one's own', and other such brilliant people that might make me work harder), all of my books, an ancient desk and contrasting 'ghost' chair and maybe a squashy velvety sofa for moments that need a comfortable mull.  It's all mine so it's ridiculously girlie, probably the only room in the house that will be.

I'll wok hard for the morning, then break at lunchtime to - as I like to say - get out of my brain and into my body, which is where most of my good ideas come from.  By this, I mean spend an hour doing something purely physical, like going for a long run, going to a dance class or maybe hot yoga.  Usually it ends up being a run, as I can just put my trainers on and go - that probably own't change.

Then back to work for the afternoon, with a mid-afternoon snack and cup of tea, and probably a pace.  As my commute home will involve only walking down the stairs, I can work pretty late and it won't matter - so I'll probably keep clattering away until around seven, when I will go downstairs to cook supper, drink some wine, talk to my boyfriend about his day in the basement music studio, and maybe watch a good film before going to bed late.

I love Kate Bush.  I am listening to her as I type.

She's one of those marvels to me - literally, 'is she real'?  From Wuthering Heights to Running Up That Hill (basically the whole of Hounds of Love), to Babooshka, Rubber Band Girl and the present day.  She came fully-formed (see also: Polly  Harvey, Rimbaud) and just gets better.

Having been introduced to it a couple of nights ago by my gorgeous hairdresser Jonathan, 50 Words for Snow is going to be my constant listening for the winter.  I can already tell.

I went to my amazing local record shop to buy it this morning (Resident, see sidebar).  They have a lovely thing there, of writing their own explanatory/helpful notes, stuck to the cover of each album.  Wonderfully, this one started 'The story of her intense relationship with a snowman...'.  How could you not pick it up?!

Kate has so many of the qualities that are my constant loves: massive hair, theatricality, a relatively normal personal life despite her creative gifts, a fondness for leotards and chiffon...

But you don't need me to tell you that she's greatter than the sum of those ridiculously amazing parts.

50 Words for Snow - the only winter listening that will ever be happening in my house now.
Publié par ECW à 22:54 Aucun commentaire:

It might seem weird that I haven't included a 'writing' tag in this little account thus far.  It is the most important thing in my life and the thing that I spend the most time doing.

It's just that it seems a bit... I believe the technical term is: wanky.  I'm not an expert or even really a professional.  Still that doesn't stop me writing about most things so...

Screw it.  Expect wanky posts on writing and maybe even 'my creative process' (the second one was a joke), post haste.


*I'm also making announcements to nobody**!

** As I haven't yet told anybody about this little weblog - I'll explain later.
Publié par ECW à 20:04 Aucun commentaire:

In no particular order, here is what is getting me through these autumn/winter days:

Just because it's one of the most perfect song/video/hair combinations in existence.  I could not love it more.
Publié par ECW à 12:09 Aucun commentaire:

The Only Way Is

I have become something of a TOWIE fan.  I am not ashamed.  I don't care who knows it.

As with so many of these things, my sister started it.

I'm sure you know all about TOWIE and I don't need to explain it here (unless you're one of my sneery, cultural-snob friends - hiya!).  I will say that I especially like Amy, Harry, Arg and Gemma; I think Lydia is really pretty; and, sadly, I don't think the new series is quite as good as the earlier ones.

Most importantly, here is why I have got slightly hooked on TOWIE, yet could not sit through more than five minutes of 'Made In Chelsea'*:

It's an important distinction.  I do not like to watch posh, rich kids with an overdeveloped sense of entitlement who really need to get a crap job for a while; I am all for funny, sparky people making themselves interesting for the sake of attention.  This applies to most of the cast of TOWIE as much as it does to Issie Blow, Gilbert and George, Edie Sedgwick, and many more of my all-time heroes.

* They're not even from Chelsea!  I have it on good authority.
Publié par ECW à 10:01 Aucun commentaire:

Inspired by a combination of my recent 'Books & Bands' jaunt (see previous post), and my current readng matter - the music and literature crossover starts here...

So, I'm currently reading the culty novel 'Perfume' by Patrick Suskind.  Frankly, I can't believe it's taken me this long.  This is because - as you may well know - it was famously a favourite of my old hero Kurt Cobain, and the song 'Scentless Apprentice' (from my joint-favourite album of all time 'In Utero') was inspired by it.

I have, predictably, been marvelling at every single traceable Cobain-cite - of which there are a gratifying amount.  'Like most babies smell like butter' from there on in.

Equally as predictably, this has got me thinking: my favourite book and band crossovers.

Yes, of course there are enough for a list!

Our Lady of the Flowers by Placebo
Placebo being my favourite band at the age of fifteen was a good thing on many levels (see also: bruise-coloured make-up, fake furs, chopping all my hair off, and my stepdad thinking I was a lesbian).  One of these was that they introduced me to Jean Genet.  True story - upon reading up on this song and discovering that it was inspired by the novel of the same name, I immediately headed for my local bookshop and had it ordered in specially.  It's still a favourite.

Jean Genie by David Bowie
And Molko wasn't the first to write a song about Jean Genet.  I particularly like this one as it is based upon the fact that Bowie had only seen the name Jean Genet in print, and had been mispronouncing it in his head - something I still do often with all sorts of names and words, causing frequent embarrassment.

Angelene by PJ Harvey
In another ultimate crossover of my favourite things of all time, in the world, ever: this song from the sublime album 'Is This Desire?' quotes from  JD Salinger's short-story compilation 'For Esme With Love & Squalor': "pretty mouth and green my eyes".  A beautiful line worth quoting, and I simply cannot overstate my love of the afore-mentioned short-story collection.  Although my favourite story of the bunch - in fact, my favourite short story of all time - is 'Uncle Wiggily In Connecticut'.

Space Dog by Tori Amos
My favourite Tori song, and one that is guaranteed to get me dancing whatever the time, place, or inappropriate situation.  I defy you not to.  Also notable for the line "seems I keep getting the story twisted/ so where's Neil when you need him" - among so many classic lines in this song, this one references Neil Gaiman.  Gaiman is, of course, an amazing writer with many strings to his bow (my favourite being his epic novel 'American Gods'),  and also a good friend of Tori's.  Although apparently he wasn't yet when she wrote it - at that stage, she was just a fan.  Cooler still.
Publié par ECW à 20:41 Aucun commentaire: 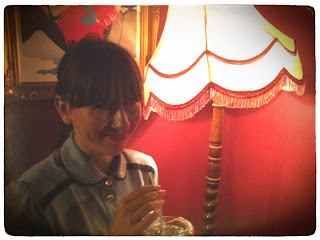 No wonder I look so contented.  I was at a night, in a pub in Mile End, called 'Bands & Books'.  If you've ever met me, and possibly if you haven't, you'll know that this was exciting stuff for ECW.  Seriously, you know that song from Flight of the Conchords, What If The World Was More Like In My Dreams..?  Well, that.

For the record, I was wearing vintage Luella, reading 'The Best of Everything', and drinking a gin and tonic.
Publié par ECW à 20:14 Aucun commentaire: 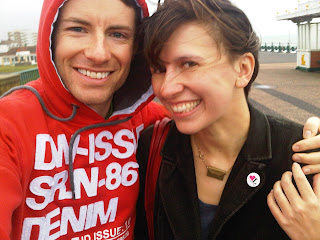