Running up THAT hill.

I love running.  This is a recent development.  I have also, in my life, quite-loved dancing and swimming and hot yoga, but not like I love running.

I used to sneer at people who “went jogging” (with a Ron Burgundy soft ‘j’, perhaps?).  I didn’t want to be like them.  They were the opposite of me and all that I stood for.  I would rather read a book and/or eat some chips than engage in such a stupid, pointless activity.  Does Joanna Newsom look like she goes running?  Does Natasha Khan look like she goes running?  Beatrice Dalle?  Jane Birkin?  Kate Bush herself?  Anyone cool in the history of forever?
However, I have had an epiphany.  I don’t know what sparked this one up – maybe my spreading hips from a strict regime of Hunching Over My Laptop At All Times, maybe some sort of out-of-body experience – but one day I went out onto the seafront and started running.  (Feel free to insert your own Forrest Gump-slash-village idiot joke here.)
And I liked it.  That was the grand total of about five months ago, and I think I may be an addict.  I like to run and run and run.  This afternoon, I am to run my first 5K race.  Not a vast distance, OK – but to my mind impressive, bearing in mind that six months ago I couldn’t run up the stairs.
Two things in particular help.  One: I live by the sea.  Two: Adidas by Stella McCartney.
I have come to the conclusion, that the real-life truth is the complete opposite to what I thought.  This happens fairly often, to be fair.  Far from being the archetypal anti-runner, it is in fact people like me who could benefit from this weird and pointless activity the most.  I am more addicted to its effect on my brain than my body.
In short, if you are as weedy/flabby/anxious/bookish/lazy as I am, then spending one hour per day getting out of your brain and into your body is A Very Good Thing.
And if by any chance you are still doubting the awesomeness of running in fashion/cultural/shallow terms, I have four words for you:
Vanessa.  Paradis.  In.  Heartbreaker. 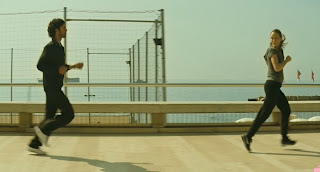 See!  There’s a whole scene where she’s running like a pro and making cute jokes about ‘feeling like Madonna’ because she’s jogging with a bodyguard!  And I think Romain Duris looks like (a Frencher, more suntanned version of) my boyfriend.  If you haven’t seen Heartbreaker, I recommend that you do so immediately.
Publié par ECW à 09:43